Wagamama
Wagamama has some amazing vegan options. In fact, the chain has committed to ensuring half of its meat is meat-free by the end of 2021.

Vegan options including the sticky vegan ‘ribs’, which are made from soya protein and mushrooms. In addition to this, they have recently launched vegan chilli ‘squid’ which is made using king oyster mushrooms.

Other vegan options include the mushroom and aubergine steamed buns, various tofu dishes including the tofu firecracker, the seitan katsu curry, known as the Vegatsu and more! Everything is clearly indicated with a ‘vg’ symbol if it is vegan. 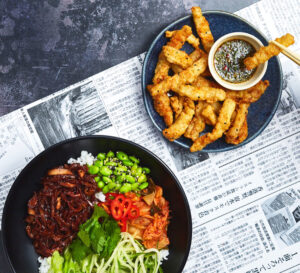 Pizza Express
Pizza Express was the first pizza chain to release a dedicated vegan pizza many years ago – although it didn’t feature any vegan cheese at the time. Now they have an extensive vegan menu, featuring starters, mains and desserts.

The vegan dough balls are a great starter, but you can also get a rosemary and garlic flatbread which is served with hummus. For mains, there are a couple of pizzas – including the Vegan Giardiniera – as well as a vegan calzone! Desserts include sorbet and a vegan carrot cake. Pizza Express also offer soya milk, so you can even have an after-dinner coffee should you so wish. 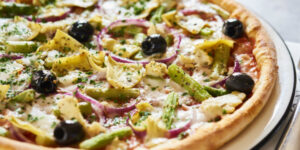 Gregg’s
Okay, I know Gregg’s isn’t a restaurant, but I do have to mention it! Gregg’s became headline news a few years ago when they released their Vegan Sausage Roll. This was huge because the bakery chain was, and still is, famous for its sausage roll. The vegan version has been a massive hit and has resulted in Gregg’s releasing more vegan options.

Gregg’s also has a vegan ‘steak’ bake and has recently added a vegan cheese and ham baguette to its offerings.

For those with a sweet tooth, the Belgian buns and glazed doughnuts are also vegan!

Nando’s
Even a restaurant that is centred around chicken has vegan options! Side dishes and starters  like the hummus and pitta bread and garlic bread are great options, but more excitingly Nando’s have in recent times released The Great Imitator, available as a burger, wrap or pitta. It consists of strips of vegan chicken alternative made from pea protein. In addition to this, you can get a vegan PERInaise in all stores.

Everything on the menu that is vegan is labelled as ‘Plant-based’. 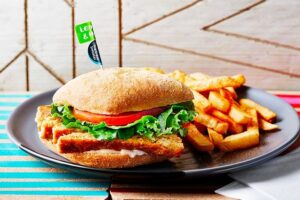 Almost every single chain eatery – be a restaurant chain, or coffee shop chain – has vegan options!

Finding vegan restaurants
Chain restaurants are great for ensuing that you can always grab something to eat, or if you’re going out with friends or family. But it is always worth supporting independent vegan eateries where possible.

As I mentioned in a previous blog, the app Happy Cow allows you to search for restaurants in your area which are either completely vegan or offer vegan options. You can also search on the Happy Cow website.